Chained Near the Richmond Liberty Trail Marker; Seemed a Fitting End to the 2014 Tour

On the last day of the Capitol Doghouse Tour, I was scheduled for Richmond, Virginia. This wasn’t my first rodeo here—in fact it was my third—so I knew what to do and where to go. That always takes a little of the pressure off. 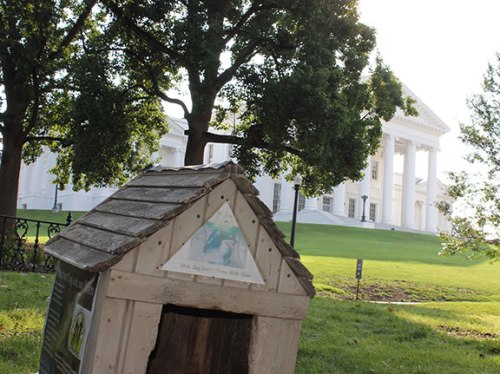 This was from our VA Capitol Chain Off two years ago

The problem with Virginia’s Capitol is that it’s difficult to get a pic in front of it. This pic is from two years ago when I did get a permit to be on the grounds, but even then they told me explicitly where we could be and only for 1.5 hours. We were not allowed directly in front of it. After our allotted time they promptly kicked us out and we had to move our one-act play to the street.

Which is actually better, because no one sees you on the Capitol grounds because it’s all fenced in and you can’t drive through it.

But still. It’s the principle of the thing…and freedom of speech and all that good stuff. I don’t like that there are some states that are welcoming or at least accepting and acknowledging of our free speech rights, and others that just trample them without a second’s thought.

So by the time we hit Virginia on July 30th, I had a case of serious short-timer-itis. Meaning I was damn tired of being chained and just wanted to be done with it. 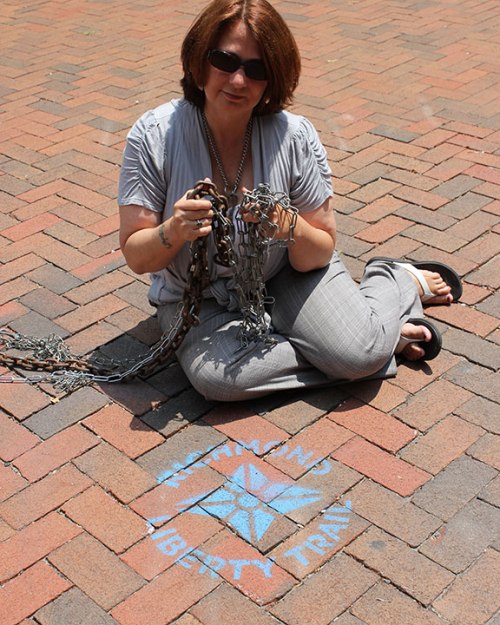 Where we were chained was along the Richmond Liberty Trail

But as luck would have it, our chaining location along the side of the Capitol complex had a new twist. It was now part of the Richmond Liberty Trail, and a spray painted marker signified the tour.

“The Richmond Liberty Trail is a walking route that connects many of downtown Richmond’s historic sites, attractions and neighborhoods, including 15 national historic landmarks, according to Visit Richmond. This 6.2 mile (10K) trail will be marked with a logo painted on the sidewalk.”

Of course that got me to thinking about how both PEOPLE AND ANIMALS have been treated as garbage throughout history, and the many, many years people spent helping and freeing those in chains along the way. It got me to feeling honored to be out here on my last day of the tour taking a stand for those without a voice in Virginia.

God knows they need all the help they can get.

I felt very down that morning because people who were supposed to chain up with me had backed out at the last minute, and I had very real fears that I would be alone out there all day. That’s a long, long time to sit alone and possibly pity yourself because you felt like you were getting nowhere in your fight for freedom; that your message was just as ignored as the dogs you serve, and that you’d be better off to go work at Taco Bell.

Hypothetically, of course. One could possibly feel that way.

But, low and behold, I ended up with three people standing on that street with me, chained to doghouses, probably looking like idiots to passersby, AND NOT CARING. Because they knew what they were doing was right.

And those three people saved me just like I wanted to save the dogs.

I loved each and every one of them for it. 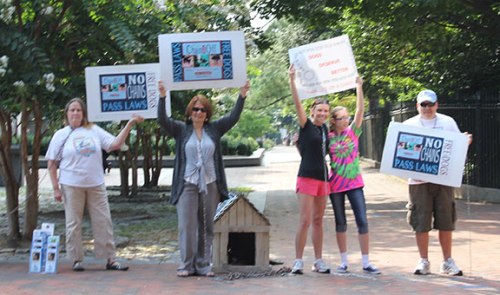 The last group on the last day of Chain Off Capitol Doghouse Tour 2014. 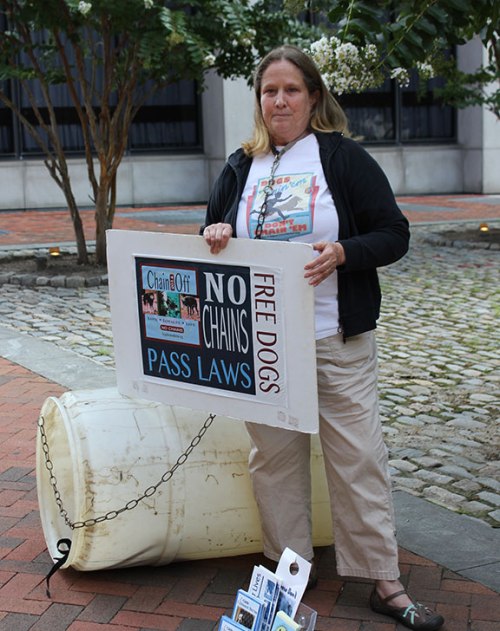 Jeanne Lou Hull, from the mountains of northern Virginia, chains out all day with me

Jeanne Lou told me horror stories of all the chained dogs where she lives…and of course how nasty people become when you try to help their dogs. She is a founding member of a humane society in her county, and they always have their hands full trying to move dogs into safe places and bigger cities where they can find new and loving homes. 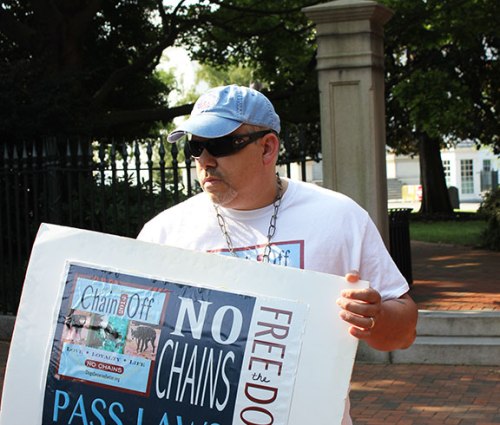 My husband Joe Horvath came out to support DDB

Even though my hubby Joe Horvath had to work a 12-hour mid that night, he still made the 2-hour trek to Richmond to stand out with me for three hours on behalf of chained dogs.

One of the women who chained with me during this tour asked me how to handle an unsupportive family. Thinking she was talking about her family of origin, I told her, “Honey, I know all about that, and you just go on anyway, because it’s important to take the stand whether your tribe believes in it or not.”

But, it turned out she wasn’t talking about her family of origin—it was her husband and her children in her own family. Apparently they are embarrassed by her actions on behalf of dogs, and constantly belittling her and putting her down for it. I so greatly admire her, because she keeps going anyway, despite the unsupportive home life. That has to be so difficult.

I have been incredibly blessed with Joe that he stands by my side as his own work permits and he believes in the work I do. He has done so much for Dogs Deserve Better as a volunteer—has driven 12 hours in a day to pick up and deliver dog food to ensure our dogs have quality food in their bellies—and that’s only the tip of the iceberg for the help he’s given DDB. I often wonder if I’d still be going without his emotional support. 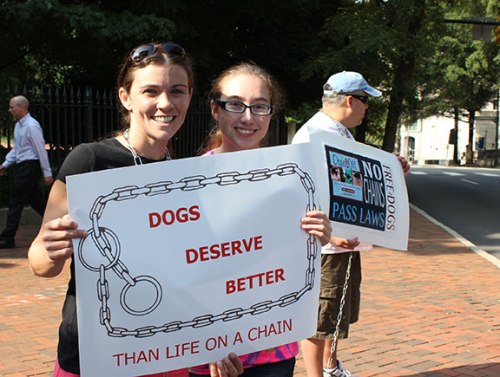 Erica Campbell and her cousin pose for a shot

Then along came Erica Campbell, pictured left, above. She was SO EXCITED to be there that she barely slept the night before. She was so passionate and so happy to be part of this Chain Off that she was up at 4:00 a.m. and headed out the door from her Virginia Beach home to ensure she got there on time. Erica’s excitement was contagious, and she kept up a lively conversation all day, helping the dragging hours drag just that little bit less.

My gratitude to these three wonderful human beings for showing up in support of our mission cannot be measured. On a day that I was feeling down and “what’s the point,” THEY showed ME what the point was, and they made it all worthwhile.

We even had a state rep and a couple legislative aids come out and give us some advice on how to get a law passed, which was great from an insider’s perspective. I’m not sure I liked hearing the message they were laying down, but I do appreciate their honesty.

What is my takeaway from this Capitol Doghouse Tour and another 49-hours added to my chain off tally?

When I most want to give up, I remember reading somewhere that most people were mere inches from success when they threw in the towel. I don’t want to be one of those people. I want to SUCCEED for these dogs!

Sometimes I feel like I’m not enough, like someone else could do this better—but then I think, but I’M HERE. And I’M willing, and I go out and do my best. Someday all that has to add up to ENOUGH, wouldn’t you think?

I sure hope so.

I just heard today that one of the very first dogs I rescued when we moved to Virginia and created the Good Newz Rehab Center for Chained and Penned Dogs on the site of Michael Vick’s former dogfighting compound, Anthony, passed away in his sleep last night.

Anthony didn’t live on a chain but in a crowded pen with a bunch of other hounds, and he apparently was not the one who got the food, because when we got him he was too weak to walk and he was a skeleton. He was also suffering kidney damage.

As soon as we saw the way he looked we took him in, no questions asked—we loved him, gave him quality food and vet care, and he stayed with us until he got a home the next year with a wonderful New Jersey family. They knew about his renal issues and wanted him anyway. 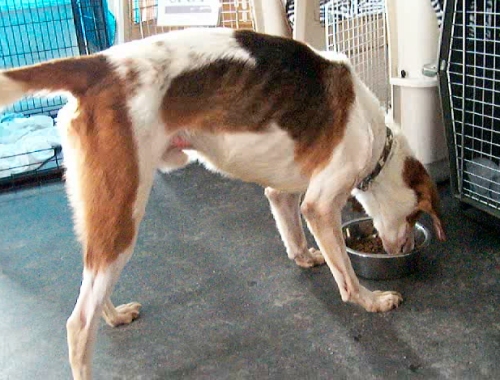 Anthony shortly after his rescue, a skeleton 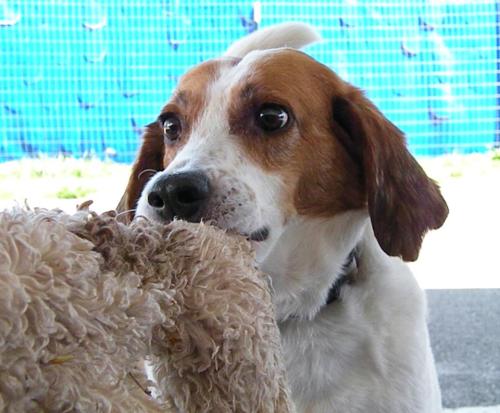 Anthony loved his toys more than anything in the world, and he always had a toy in his mouth. He liked the long, furry ones that he could drag around with him.

His mom Christina told me this in an e-mail today: “I wanted to let you know that Anthony passed away this morning. He died in his sleep sometime between 2:00 & 5:45 am. We’re heartbroken but we’re so glad to have had these last two years with him. He was in the final stages of renal failure. Thank you for taking care of him until he came to live with us. You guys did so much for him, nursing him back to health after you got him away from his owner. When we got him, I told everyone I’d be happy to give him one good year and he gave us almost two. He was such a wonderful boy and we loved him like crazy. He’s crossed the Rainbow Bridge now and he’s pain free.”.

This one’s for you, Anthony. I love you—you make it all worthwhile, buddy.

One response to “Chained Near the Richmond Liberty Trail Marker; Seemed a Fitting End to the 2014 Tour”